Cloud, AI and data to transform India in next decade: Nilekani 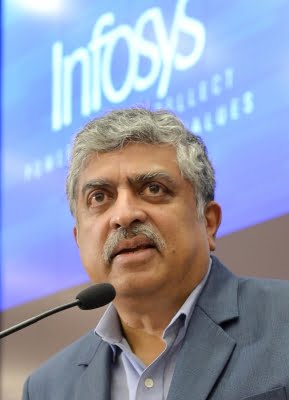 New Delhi, April 20 (IANS) Although there is an acceleration in tech adoption and innovation across sectors in India, the key challenge now is to scale new-age technologies like Cloud, AL/ML and data in a way that these can empower more than a billion people in the next decade, global IT major Infosys co-founder and Chairman Nandan Nilekani said on Tuesday.

In a conversation with Anant Maheshwari, President, Microsoft during the first virtual edition of ExpertSpeak, Nilekani said that in health, education and financial services, tech has an extremely important role to play.

“One of the first challenges we have is of scale and technology is the only way we can reach more than 1.3 billion people. Second, we have a young population demanding a better life and better jobs and speed is critical, making technologies like the cloud so important to be able to deliver value to a billion people,” he stressed.

“Equally on the data side, as the data byproduct of this activity goes up, we can apply AI and big data and use that to deliver better learning outcomes, better loans and better health diagnostics,” he noted.

?According to Nilekani, everything that human beings do will be amplified with AI and data.

“So, I see a big role for cloud, AI and data in the coming years for India to really transform itself,” he said.

Maheshwari said that the pace of tech adoption is reshaping every sector in the country — from education, health, public services, to traditional sectors like retail, financial services, manufacturing, MSME and agriculture.

“Microsoft has been a long-standing partner in helping India build self-reliance in technology. We were among the first companies to invest in data centres in India. Today, we see organisations leverage public tech platforms at scale, along with building their own capabilities and IP,” he informed.

“Through our tech stack, we are very focused on helping organisations across India build their own IP and digital infrastructure to achieve technological self-reliance,” Maheshwari added.

According to Nilekani, we are building in India whether it’s identity payments like UPI or the data empowerment architecture.

“These are Indian homegrown innovations which have allowed us to use global technology but in a way that India is not locked in,” he noted.

The discussion also highlighted the need for a responsible and ethical tech ecosystem in the country that drives innovation and fuels consumer confidence.

“People will only use technology that they trust. It is critical that tech platforms are built for privacy, security, AI ethics and internet safety, especially for children,” said Maheshwari.

Twitter
Flip
Koo
Previous article
OPPO A74 5G launched in India at Rs 17,990
Next article
Gaurav Gera: A hit changes your life
This May Also Interest You
Sports