Driven exports worth $3B, created 1M jobs in India: Amazon 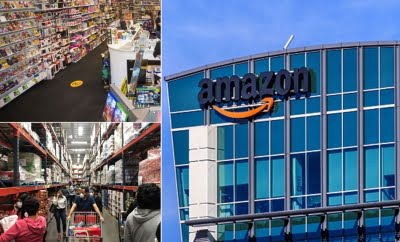 Bengaluru, April 8 (IANS) Providing a glimpse of its growth in the India market, Amazon on Thursday said that it has digitised 25 lakh MSMEs, enabled cumulative exports worth $3 billion, and helped create nearly 10 lakh direct and indirect jobs in India since 2013.

Since January 2020 alone, nearly 2.5 lakh new sellers have joined Amazon.in, and the number of direct and indirect jobs the company helped create reached nearly 3 lakh during this period which saw widspread disruptions due to Covid-19.

The company said that there is a strong demand from global customers for a range of “Made in India” products including toys, jewellery, bed linen, healthcare products, tea, leather products and others.

It took the programme three years to clock the first billion in cumulative exports, the second billion came in 18 months and the third one has taken just 12 months.

Today there are over 70,000 Indian exporters on the programme who have cumulatively crossed $3 billion in exports, the company said.

“As the world around us is more digital than ever with the Internet and technology becoming an integral part of our lives, we see a massive opportunity to empower millions of SMBs across the country and remain committed for Amazon to be a catalyst for such accelerated progress,” Amit Agarwal, Global Senior Vice President and Country Head of Amazon India, said in a statement.

Amazon said it also sharpened its focus on bringing the benefits of e-commerce to neighbourhood stores and had launched a new program called “Local Shops on Amazon” in April 2020.

The programme has grown 10 times since launch and today over 50,000 offline retailers and neighbourhood stores from across the country are selling on Amazon.in.

The company said that it is on track to fulfill these commitments.