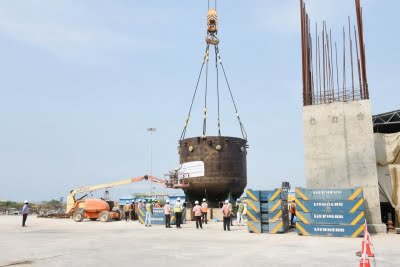 Russia’s integrated nuclear power player Rosatom on Friday said the core melt localisation device, or core catcher, has been installed in the design position under the reactor pit of power unit 4 of Kudankulam Nuclear Power Project (KNPP) which under construction.

The reactor is of VVER-1000 design, similar to the two 1,000 MW units that have started commercial power generation long back.

“The installation of the core catcher in the design position is an important step of the NPP (nuclear power plant) construction,” said Vadim Khlivenko, Deputy Director for Projects in India, Head of Construction Division at KNPP Construction Site.

“It is a unique system of NPP projection and the first large-size equipment item that is installed in the reactor building. Currently core catchers are installed at all the NPPs constructed under Russian designs,” he added.

The core catcher weighing over 160 tons is a unique equipment that is supposed to contain the molten core material (corium) in case of a nuclear reactor meltdown.