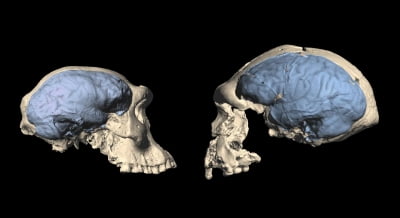 London, April 9 (IANS) Modern human brain structures developed 1.5 to 1.7 million years ago in the African Homo populations and after they had already begun walking on two feet and had even started spreading out of Africa, according to a study.

The first ancestors from the genus Homo emerged in Africa about 2.5 million years ago and walked upright, but had

primitive ape-like brains — only about half the size of present-day humans, said the researchers from the University of Zurich (UZH) in Switzerland.

Besides the size, the team also found that their location and organisation of individual brain regions differed

from the modern human brain.

“The features typical to humans are primarily those regions in the frontal lobe that are responsible for planning and executing complex patterns of thought and action, and ultimately also for language,” said Marcia Ponce de Leon, from the varsity’s Department of Anthropology .

Since these areas are significantly larger in the human brain, the adjacent brain regions shifted further back, de Leon noted.

The team used computed tomography to examine the skulls of Homo fossils that lived in Africa, Georgia and the Java in Indonesia 1 to 2 million years ago. They then compared the fossil data with reference data from great apes and humans.

They found that the first Homo populations outside Africa — in present-day Georgia — had brains that were just as primitive as their African relatives.

And their brains were not particularly large or modern until around 1.7 million years ago.

However, these humans were quite capable of making numerous tools, adapting to the new environmental conditions of Eurasia, developing animal food sources, and caring for group members in need of help.

“It is likely that the earliest forms of human language also developed during this period,” said anthropologist de Leon.

Twitter
Flip
Koo
Previous article
US adds 7 Chinese supercomputing firms on Entity List
Next article
Mars did not dry up all at once, says study
This May Also Interest You
Technology