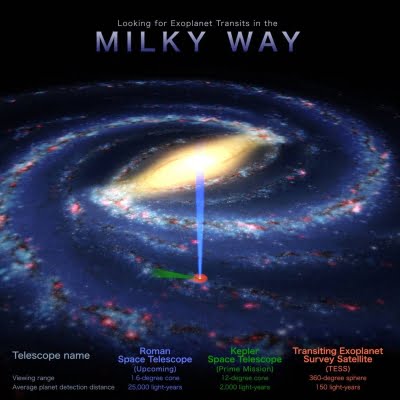 Scheduled for launch in the mid-2020s, Roman will be one of NASA’s most prolific planet hunters, the US space agency said on Wednesday.

Roman will locate these potential new worlds, or exoplanets, by tracking the amount of light coming from distant stars over time.

In a technique called gravitational microlensing, a spike in light signals that a planet may be present.

On the other hand, if the light from a star dims periodically, it could be because there is a planet crossing the face of a star as it completes an orbit. This technique is called the transit method.

By employing these two methods to find new worlds, astronomers will capture an unprecedented view of the composition and arrangement of planetary systems across our galaxy.

The mission will provide a unique observational platform for discovering the tiny changes in light required to find other worlds via microlensing.

This detection method takes advantage of the gravitational light-bending effects of massive objects predicted by Einstein’s general theory of relativity.

As the stars drift along in their orbits around the galaxy, the alignment shifts over days to weeks, changing the apparent brightness of the source star.

The precise pattern of these changes provides astronomers with clues about the nature of the lensing star in the foreground, including the presence of planets around it.

Many of the stars Roman will already be looking at for the microlensing survey may harbour transiting planets.

“Microlensing events are rare and occur quickly, so you need to look at a lot of stars repeatedly and precisely measure brightness changes to detect them,” said astrophysicist Benjamin Montet from University of New South Wales in Sydney.

“Those are exactly the same things you need to do to find transiting planets, so by creating a robust microlensing survey, Roman will produce a nice transit survey as well.”

In a paper published at IOPscience, Montet and his colleagues showed that Roman — formerly known as WFIRST ­– could catch more than 100,000 planets passing in front of, or transiting, their host stars.

The transit approach to finding exoplanets has been wildly successful for NASA’s Kepler and K2 missions, which have discovered about 2,800 confirmed planets to date, and is currently used by NASA’s Transiting Exoplanet Survey Satellite (TESS).

Since Roman will find planets orbiting more distant, fainter stars, scientists will often have to rely on the mission’s expansive data set to verify the planets.