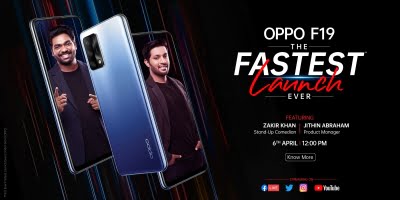 New Delhi, April 1 (IANS) After successfully launching two smartphones under the OPPO F19 Pro series, the Chinese smartphone maker on Thursday announced that it is all set to launch OPPO F19 on April 6.

The company claims that with 33W Flash Charge, which runs on a 11V3A solution, OPPO F19 fully charges in only 72 minutes.

OPPO F19 is crafted for the youth who looks for trendy and stylish smartphones that not only complements, but also augments their lifestyle, the company said in a statement.