Russia's Soyuz capsule with 3 space travellers to dock with ISS 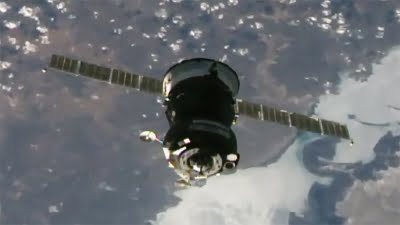 Washington, April 9 (IANS) A Russian Soyuz capsule with a manned spacecraft named after Yuri Gagarin blasted off from the Baikonur spaceport in Kazakhstan on Friday for the International Space Station (ISS).

They launch started a two-orbit, three-hour flight to reach the International Space Station and join the Expedition 64 crew.

“The crew aboard the Soyuz MS-18 spacecraft were given the go for final approach to the @Space_Station, and final approach has started. They are scheduled to dock to the station at 7:07am ET,” NASA tweeted.

“Welcome to the @Space_Station! Docking is confirmed at 7:05am ET for the Soyuz spacecraft. On board are Mark Vande Hei (@Astro_Sabot), and Oleg Novitskiy and Pyotr Dubrov of @Roscosmos,” it added a few minutes later.

This is the second spaceflight for Vande Hei, the third for Novitskiy, and the first for Dubrov.

The spacecraft carrying the three space travellers honours the 60th anniversary of Gagarin becoming the first person in space.