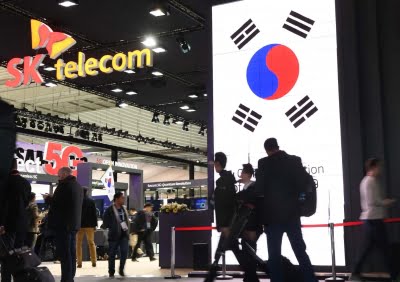 The telecom operator said that it will conduct a spin-off to form the holding company, which will oversee operations of its non-mobile affiliates and subsidiaries, such as memory chip giant SK hynix Inc., e-commerce firm 11Street Co and ride-hailing company T Map Mobility Co, among others.

The new holding company will also focus on investments in semiconductor-related companies.

While SK hynix has made active investments in the past, such as acquiring Intel’s NAND memory business in October last year for $9 billion, its parent SK Group wants to tighten its grip on the chipmaker and help it aggressively expand investments.

The remaining entity will focus on the mobile carrier’s traditional telecom business and expand to new sectors, such as artificial intelligence and data centers.

The mobile carrier said it will make a decision on the details of the spinoff within the first half of this year.

The telecom operator’s spinoff plan had been widely expected after CEO Park Jung-ho said in a shareholders meeting last month that the company would overhaul its governance structure amid a slump in its share price in recent years.

The latest announcement comes as the mobile carrier’s non-mobile subsidiaries have rapidly grown to account for 24 per cent of the company’s total operating profit last year.

The subsidiaries have also formed global partnerships to boost their presence in the local market, with T Map Mobility joining hands with US ride-hailing firm Uber Technologies Inc. to form a taxi-hailing joint venture in South Korea.

A merger between SK Inc. and SK Telecom’s new holding company would give the SK conglomerate direct control over the memory chip giant.

Twitter
Flip
Koo
Previous article
'AI in courts will aid decision-making for legal fraternity, litigants'
Next article
iPhones in 2022 to feature 48MP camera, no mini: Report
This May Also Interest You
Technology

US to train Indian astronauts, cooperate on planetary defence (Ld)