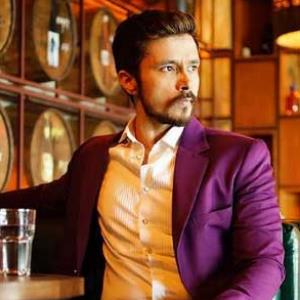 Bollywood has seen a surge of politically themed films, be it RAAJNEETI, INDU SARKAR, THACKERAY or the upcoming movie on Prime Minister Narendra Modi's life. Actor Darshan Kumaar, who plays a journalist in PM NARENDRA MODI, says if the film industry can make biopics on sports stars, then why not on politicians as well. According to reports, the latest to join the bandwagon is a biopic on Road and Transport Minister Nitin Gadkari.

On the biopics boom on politics or politicians, Darshan told IANS, "Audience wants something new, something close to real life. Thus biopics are working superbly." As movies like INDU SARKAR, RAAJNEETI, THACKERAY, MANTO and AIRLIFT faced opposition from certain sections, Darshan said, "Politics is an integral part of life, whether people are conscious or not. The 'Mahabharata' is the greatest example of that. The audience accepts a film if the content is good."

Veteran actor Anupam Kher's latest release THE ACCIDENTAL PRIME MINISTER, based on former Indian Prime Minister Manmohan Singh's years in power, was termed a "propaganda film". On being asked if that's fair and also would he like his film PM NARENDRA MODI be looked at with the same prism, Darshan said, "Not at all. This movie reflects the strength of determination and hope. It shows if you believe in yourself, work hard and have the passion to pursue a dream, you will achieve it. It hardly matters if you dream to become scientist, doctor, actor or Prime Minister."

Darshan has earlier worked under the baton of Omung in films like MARY KOM and SARBJIT, both based on real life stories. Darshan faced a lot of challenges while preparing for his role as a journalist in PM NARENDRA MODI. "While working on a biopic, the greatest challenge for any actor is to play and do justice to a real-life character in a limited time. The greatest challenge was to learn and depict before camera the way a journalist speaks and behaves," he said.