Meet the next Jayalalitha – Digangana Suryavanshi 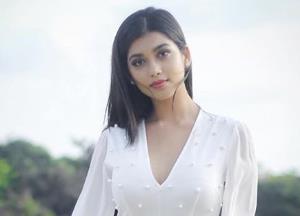 As Kangana Ranaut is gearing up for her upcoming biopic on the legendary superstar turned politician Jayalalithaa.. a newcomer is already labeled as the next Jayalalithaa by a veteran producer down south.  Who is she.. let’s find out?.

Remember Digangana Suryavanshi the cute and lovely television heartthrob that made the entertainer No.1 Govinda go crazy as the audience giggled in the comedy FRYDAY.

Digangana Suryavanshi is in big demand down south. The actress is bagging movies one after the another after the immense love showered by the fans for her first step in Tollywood with Telugu movie HIPPI co starring Kartikeya Gummakonda and directed by T.N Krishna.

Digangana is the emerging star down south and the award winning veteran producer Kalaipuli aka S. Thanu has called her next Jayalalithaa!!

Next Jayalalithaa … Kangana are you listening or reading this…