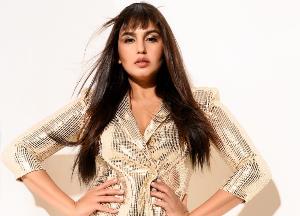 After shooting for three months in the US, actress Huma Qureshi is excited to visit her family.

The actress was in the US to shoot for Zack Snyder's "Army Of The Dead".

Following the recent wrap up of the highly anticipated zombie heist Netflix movie, the crossover star flew back to Mumbai, and is now looking forward to spending time in Delhi with her parents.

"Shooting in the US was too much fun and I learnt a lot. But I was missing home. I was ready to come back by the end of the schedule. Diwali in Mumbai was special and now I want to meet my parents who I have not seen for six months now. I'm ready to be spoilt by mom and dad," Huma said.

"Army Of The Dead" follows a zombie outbreak in Las Vegas even as a man assembles a group of mercenaries to pull off the greatest heist ever. "Army Of The Dead" marks Snyder's return to the zombie genre, having previously made his directorial debut with "Dawn Of The Dead".

Recently, Huma earned a name in the 'New Wave Actors List' in Los Angeles. The list was released by Film Independent, an organisation that recognises diverse performances and highlights those individuals who deserve recognition in Hollywood. The announcement is an industry recognition for Huma's impactful performance in her most recent Netflix series, "Leila".