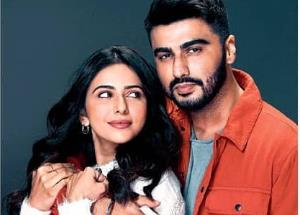 Arjun Kapoor and Rakul Preet team up for the first time in a love story being produced by Bhushan Kumar, Nikkhil Advani, John Abraham.

A story set across borders which will star fresh jodi Arjun Kapoor and Rakul Preet Singh.

John Abraham will bring together a new fresh Jodi for the audiences. He will produce the film which is a cross-border love story. Emmay Entertainment shared the news on Instagram and captioned, "Here's to new beginnings! A story set across borders starring @arjunkapoor & @rakulpreet, directed by @kaachua goes on the floor this month! #WaitForIt ??"

As per reports, Arjun Kapoor said, “I have grown up in a joint family so I understood that it’s the biggest pillar of love, strength, and support. That’s the essence of our film”

Rakul is also a part of Nikkhil Advani's upcoming film Marjavaan which stars Siddharth Malhotra and Tara Sutaria in lead. The Panipat actor Arjun Kapoor is also excited for this collaboration.

This untitled film will go on floors this month. We are super excited about this fresh Jodi.