Seeing Ajay Devgn on a Scooty, fans mob him at ‘Bholaa’ shoot 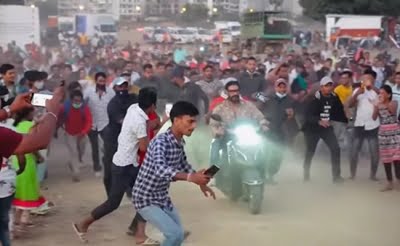 As Bollywood superstar Ajay Devgn basks in the box-office success of his recently-released movie ‘Drishyam 2’, he is already shooting for his next film, ‘Bholaa’.

During the shooting of a sequence of the film in which the actor is supposed to ride a two-wheeler, Ajay was mobbed by his fans.

The ‘Singham’ actor took to Instagram and shared a video in which he could be seen surrounded by scores of fans as he rides a Scooty. He captioned the video, “It’s good when a mob chases you for the right reasons. Grateful for their (love).”

The actor, who earlier faced backlash for featuring in a tobacco product along with fellow Bollywood superstars Shah Rukh Khan and Akshay Kumar, was extra cautious with his social media post as he advised his followers to always wear a helmet while riding a two-wheeler.

“PS – Always wear a helmet while riding. My head is bare because I was part of a shoot. #SetsOfBholaa,” he clarified in his post.

Talking about ‘Bholaa’, the film is Ajay’s fourth directorial after the 2008 movie ‘U Me Aur Hum’, ‘Shivaay’ (2016), which clashed with Karan Johar’s ‘Ae Dil Hai Mushkil’ and became the bone of contention between KJo and Ajay’s wife Kajol as per KJo’s book ‘An Unsuitable Boy’, and ‘Runway 34’ (2022), in which he shared the screen with Bollywood icon Amitabh Bachchan.

‘Bholaa’, which also stars Tabu, is the official Hindi remake of the 2019 Tamil superhit ‘Kaithi’. The film marks the ninth association between Ajay and Tabu, who have earlier worked together in films like ‘Golmaal Again’, ‘Vijaypath’, ‘Haqeeqat’, ‘Thakshak’, ‘De De Pyaar De’, ‘Drishyam’, and ‘Drishyam 2’.