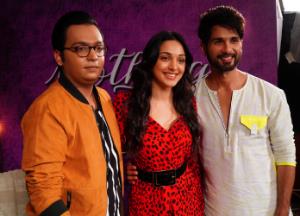 The new lead pair in town, Shahid Kapoor and Kiara Advani are already being bestowed with much love by the audience and the fans have been rooting for this jodi and their sizzling chemistry. The pair indulges in a #NothingToHide conversation as they get up close and personal with host Renil Abraham on By Invite Only on zoOm.

Speaking on working with Shahid Kapoor for the first time in a film, Kiara said, “Despite having all these years of experience, Shahid is very much like a child on set, wanting to better every take and trying to better himself. It's not 'I know it all' attitude. I was comfortable enough to tell Shahid, 'Please do another take because I think you can do it better that this’.”

Commenting on Shahid’s career trajectory, Kiara revealed, “I was not a fan of SHAANDAAR.”

Shahid agreed with the same. “I would erase Shaandaar from my career trajectory if I could. No one from this generation of actors can claim that a bad film did well just because they were in it. I think I have a very loyal fan following. And I thank them every day of my life. I have done some really crappy films", he further added.

Further talking about the hullabaloo surrounding the kissing scenes in KABIR SINGH, Shahid Kapoor said, “It’s not about what happens in the film, it is about how it happens and how it makes you feel the way it makes you feel.”

On maintaining his work and life balance Shahid said, “I have to spend some time with my children every day. It sometimes means I am not going to shoot beyond this point of time. That's not something negotiable for me, it's priority!”

On a lighter note, both Shahid and Kiara could not stop gushing over Varun Dhawan. “Varun Dhawan has great parents. I feel like his parents have given him some really good positive energy and it reflects in him everyday. I think he's one of the most positive kids I've seen around", stated Shahid.

When asked to name an actress that she would like to be in a same-sex relationship with, Kiara said, “I think Deepika is fabulous”.