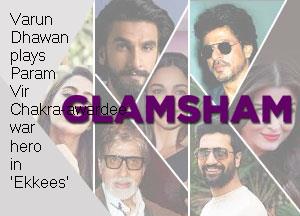 Mumbai, Nov 5 (IANS) “Andhadhun” director Sriram Raghavan has confirmed that he is gearing up to launch “Ekkees”, the biopic of late Second Lieutenant Arun Khetarpal who was posthumously honoured with Param Vir Chakra for sacrificing his life during the Indo-Pakistan War of 1971. Raghavan will collaborate with actor Varun Dhawan on the project. This is the second time the duo will work together after 2015’s “Badlapur”.

“We are still in the scripting stage of the film. We are also busy with pre-production and the casting process. We will start preparations for the film over the next three to four months and then begin shooting in early next year,” said Raghavan.

Varun took to social media a while back to announce that he would team up with “Badlapur” director Raghavan for an upcoming project, which casts him as a soldier of the Indian Army. The actor had made the announcement on October 14, the birth anniversary of late Second Lieutenant Khetarpal, along with an artist’s representation of the war hero.

“Ekkees” will portray Arun Khetarpal’s relentless heroic efforts against the Pakistani Army in the Battle of Basantar during the 1971 Indo-Pak war. Raghavan’s official revelation about the project came while he was interacting with the media at a special screening of the short film “Nano-So-Phobia”, featuring Swaroop Sampat.

About the short film, Raghavan said: “I really liked the film. I have worked with (director) Rakesh (Jain) in all my films. I feel really happy that he has made his first film. He has directed a short film now, and I hope soon he will soon make a feature film. I really liked the performance of all the actors. I felt there was something fresh about the casting.”

Asked what his phobia was, the filmmaker replied: “I have many phobias but I will not share it here. I used to get really scared of lizards but now I am okay with it.”

Talking about the growing popularity of short films, Raghavan said: “The short film has its own fun. It’s like telling a short story. It gives you a different kind of freedom and creative satisfaction.”

Raghavan added that makers of short films don’t have to deal with box-office pressure like mainstream filmmakers do. “When you make a short film, there is one advantage that you don’t have to think about box-office numbers as we (full length filmmakers) have to. I think the whole purpose behind making a short film is it should be fun and worth remembering,” he said.