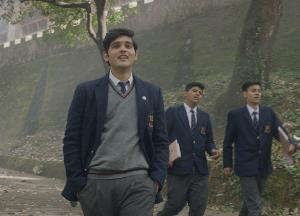 NOBLEMEN movie review is here. The Indian English language drama is backed by Yoodlee Films – a production venture of Saregama. Starring Kunal Kapoor and Ali Haji in pivotal roles, the movie is directed by Vandana Kataria. NOBLEMEN premiered at the New York Indian Film Festival in 2018 and Ali Haji won the ‘Best Child Actor’ award. The movie is released theatrically today thru PVR’s movie-on-demand platform Vkaoo. How noble and or novel is NOBLEMEN?. Let’s find out in the review of NOBLEMEN.

Immediate reaction when the end credits roll
Unsettling, shocking, devastating but in no way you can dare to overlook or ignore.  This shockingly brutal game of One-upmanship between life and theatre cages you where you see a boarding school drama take horrific turns and ends as a Shakespearean tragedy that instantly refuses to go out of your mind.

The Story of NOBLEMEN
In a smartest of turns, writers Sonia Bahl, Sunil Drego and Vandana Kataria coin William Shakespeare’s comedy THE MERCHANT OF VENICE for this devastating tragedy that confronts the dangers of bullying in boarding/residential schools with complexities of homosexuality and homophobia. Its winter and an open minded drama teacher Murali (Kunal Kapoor) takes charge of the arts and drama division of the prestigious elite Mount Noble High School. Murli has strange way of functioning. He asks his students about their idea of revenge and during a session asks them to remove their clothes to feel free. Murali decides to stage THE MERCHANT OF VENICE for the Founder’s Day celebration of the institute. The sensitive Shay (Ali Haji) and Pia (Muskaan Jaferi) are chosen to play the lead Bassanio and Portia. Shay’s senior and son of a movie star Baadal (Shaan Grover) is unhappy with the casting and he has personal grudge towards Shay and his caring and sensitive attitude because that has taken away his desire Pia from him to Shay. Baadal’s friend, sports captain and a promising footballer Arjun (Mohammad Ali Mir) is also the leader of the notorious boarding school gang that bullies juniors and sees them as prey for their ugly demonstration of dominance. Baadal shares his plight with Arjun and what follows is a series of shocking and devastating events in the boarding school where the quality of ‘humanity’, ‘mercy’ ‘revenge’ and ‘forgiveness’ take tragic and unexpected turns.

Strong points
Those who have seen the hauntingly sensational 2015 Ukranian art house drama THE TRIBE by Myroslav Slaboshpytskiy, may find some similarities in the boarding school setting and the crises of a person trapped in a place controlled by a notorious gang. Production designer Vandana Kataria in her debut succeeds in telling a audaciously willful examination of how bullying can be deadly, the impact of violence on teenagers, cruelty, exploitation, the complexities of homosexuality and homophobia with sporadically unsettling energy where monsters create more monsters. Sexual abuse, violence, bullying has been an ugly chapter in teens around the globe especially in residential schools, hostels, boarding schools. Majority of them have had an experience of that only the degree and intensity might have changed. It throws spotlight on prejudice – an efficient and sensitive Shay is no macho. Such ‘soft’ ones are always accompanied by a pulp and happy Ganesh (Hardik Thakker) so they are the obvious targets and are made to suffer. Silence is golden but how long?. The first time filmmaker Vandana Kataria shows tremendous efficiency in juxtaposing the famous ‘Jew’, ‘revenge’ and ‘mercy’ quotes from Shakespeare’s THE MERCHANT OF VENICE in this shocking, unsettling coming of age tragedy. The English spoken here is natural and without any accent making it feel like a language the actors are familiar with like their mother tongue.

Performances
Noblemen belongs to Ali Haji. As the sensitive Shay who shows tremendous resistance and tolerance from Arjun and Baadal. He never gives up and refuses to be like them. Ali Haji gives a terrific portray of a teenager who is fighting demons both outside – the gang of bullies and inside –his sexual orientation. Kunal Kapoor as Murali is charming and fantastic. Mohommad Ali Mir as Arjun is outstanding and Shaan Grover as Baadal is quite good. Muskaan Jaferi as Pia leaves her mark. Hardik Thakkar as Ganesh has his moments. Other significant contributions come from the senior supporting cast where Soni Razdan as Shay’s mother, M. K. Raina as the Headmaster, Ivan Rodrigues as Deputy Headmaster, all chip in with adequate support.

Flaws
The climax is questionable. It’s almost like a suicide. Plus there are certain unreasonable liberties in this picture of harsh reality. The principal and the head of the house have no idea what Arjun and his notorious gang is doing in canteen, bathrooms, in their rooms etc. the marks, bruises suffered by Shay is never noticed. Why no CCTV camera and what privacy was the principal talking about in a boarding school?, the students must be below 18 years.

Final words
NOBLEMEN is a novel entry of Vandana Kataria as a gritty, unflinching story teller who is smart enough to accept the challenge and even throw it as well. NOBLEMEN is a stunningly powerful statement that highlights cruelty, violence amongst teenagers in the name of bullying and triggers the age old debate on male machismo and homophobia that is haunting those boys hostels, boarding schools etc. Vandana Kataria tops all this up with a bow to Shakespeare and “ ‘Good Things Should Be Praised”.