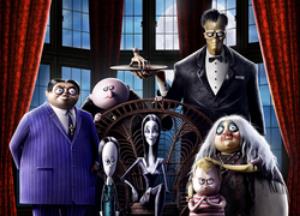 The Addams Family is back and this time they are here to spook you as well as entertain you at the same time. This time although the characters remain the same, what we see is that the members have now stepped their foot in the 21 century and are horrified with the treacherous, greedy, arrogant and sly reality TV host Margaux Needler essayed by Allison Janney.

Recently, MGM Studios gave us a glimpse of the characters. Here, we have Oscar Isaac as Gomez Addams, Charlize Theron as Morticia Addams, Chloë Grace Moretz as Wednesday Addams, Gomez, Finn Wolfhard as Pugsley Addams, Nick Kroll as Uncle Fester, and Bette Midler as Grandmama. The movie will be for the first time released in 3D.

The y took to social media post in which it read, "We’re terribly excited to introduce our kooky family! They’re all together ooky. @meettheaddams ?? #MeetTheAddams"

The film is directed by Conrad Vernon and Greg Tiernan, presented by Universal Pictures. The film is slated to release on October 11, 2019.

Get ready to spook with the characters.

Twitter
Flip
Koo
Previous article
Badshah to have open talk on sex with daughter when she grows up
Next article
Bollywood Box Office Report Of The Week: 1 August 2019
This May Also Interest You
Sports