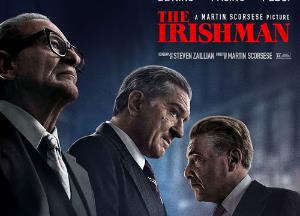 It is not easy to sit through 209 minutes of this magnificent mobster-piece. After all, we don’t love mobsters as much as Martin Scorcese, who has had a life-long passion for the trigger-happy outcasts who, for reasons of perverse pride and honour and subverted masculinity, love to shoot their victims in the face.

In the face of it, “The Irishman” is Scorcese’s final farewell to those immigrant hitmen who ruled suburban America in the 1950s. It is a fabulous farewell, seething with an unexpressed rage, brimming over with the director’s love for his outlawed characters and their family affairs, all arranged in a spiral that threatens to tumble down in a rush any moment but miraculously manages to stay in place.

“The Irishman” is not only Scorcese’s longest film, it is also his most verbose and emotional mobster movies. The last half an hour is in fact amongst the most brilliant portrayals of loneliness and approaching death that I’ve seen in cinema. De Niro excels as a man who, after a lifelong liaison with violence, craves for his estranged youngest daughter to forgive him.

As the daughter Peggy, the brilliant child actress Lucy Gallina’s accusing eyes follows De Niro and the blood-drenched narrative, to their nemesis. In an epic film — and let it be known that this is an epic work of splattered art in the truest sense — chockful of accomplished performances, little Lucy Gallina’s Peggy becomes the moral compass that weighs the monstrous misdeeds of her father and his two associates, played with oscillating brilliance by Joe Pesci and Al Pacino. These are two of the most brilliant American actors of all times whom we haven’t seen in a while. To see them get together with God Of Histrionics De Niro is an experience of a lifetime.

We never feel the collective weight of their reputation. Scorsese uses this iconic trio strictly as characters. The socio-political dynamics of the 1960s and 70s are applied to the lives of this trio of mobsters with telling ferocity. The narrative lumbers forward at a pace that today’s generation of Scorsese followers would find challenging. The Irishman is a very wordy film. There are long passages of conversation where the characters discuss violence and corruption so casually , we need to focus on the unstated punctuations between the lines to see where these heroes are heading to, and at what cost.

Finally to me, the brilliance of The Irishman is incumbent on the profound relationship between violence and self-worth that the plot accentuates through the characters’ aging passages. CGs knock off 40 years from De Niro, Pacino and Pesci. But the process is not an exercise in bravura. As we see these men plod violently from amoral middleage to their winter of discontent, a whole ethos of the curdled American Dream passes by in front of our eyes.

The Irishman is not just great film for the performances(watch out for the little-known actress Marin Ireland as De Niro’s eldest daughter in the one sequence where she scoffs at her dad’s justification for being such a brutal householder), its keen eye for period detail(truly the Devil lies in the details) and its severely austere soundtrack , but also because like Scorcese’s best films on mob blood like Mean Streets and Good Fellas, The Irishman shows us the ultimate nullity of men who swear by violence.

A pity, it takes so much bloodshed to get there. But the violent journey is worth every bit our time and patience.We may not love mobsters as much as Martin Scorsese. But we surely cannot help plunging deep into the lives of these uprooted sophisticated sociopaths who stop at nothing. And that’s where it ends for them. Nothing. [By Subhash K Jha]

- Advertisement -
- Advertisement -
It is not easy to sit through 209 minutes of this magnificent mobster-piece. After all, we don't love mobsters as much as Martin Scorcese, who has had a life-long passion for the trigger-happy outcasts who, for reasons of perverse pride and honour and subverted...The Irishman Movie review: Critics Review, Rating, Cast & Crew