3rd T20I between Aus, NZ women abandoned due to rain 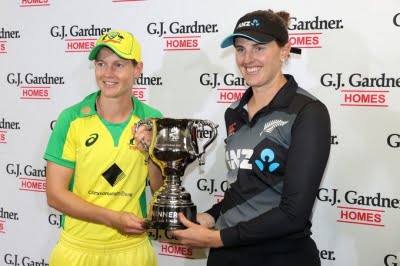 Auckland, April 1 (IANS) The third T20I between New Zealand women and Australia was abandoned due to rains on Thursday, leading to the series ending 1-1. Only 2.5 overs could be bowled in the match, which started after a 90-minute delay at Eden Park.

The game itself was reduced to 13 overs with New Zealand winning the toss and choosing to bowl. Rosemary Mair dismissed Beth Mooney in the second over by which time it had started raining again.

The two teams played out the next over after which the umpires led them back to the dugout at 4.45 p.m. local time. The match itself was called off 45 minutes later.

The two teams now face each other in a three-match ODI series that will be played in Mount Maunganui from April 4.

Australia are chasing their 22nd consecutive ODI win, which would be a new world record across men’s and women’s cricket. They would surpass the mark set by Ricky Ponting’s all-conquering Australian men’s team in 2003.