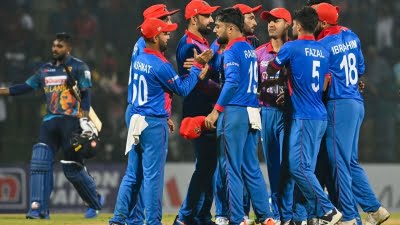 New Delhi, Nov 28 (IANS) Afghanistan have confirmed their spot for next year’s Men’s ODI World Cup after their second match of the 50-over series against Sri Lanka on Sunday was abandoned due to rain.

The five extra points that Afghanistan received in the ICC Men’s Cricket World Cup Super League standings courtesy of the no result takes them to a total of 115 points in the current table.

Afghanistan are sitting safely in seventh place as per the current standings, with the top eight sides at the end of the Super League earning an automatic spot at next year’s 50-over World Cup in India.

While the five points split by rain abandoning the second ODI was a good result for Afghanistan, it was the exact opposite for Sri Lanka as their hopes of automatic qualification remained hanging by a thread.

Dasun Shanaka’s side are in tenth place on the standings with just 67 points to their name and only have four matches remaining this period to try and sneak into the top eight. Sri Lanka, the 1996 ODI World Cup winners, can pick up a valuable 10 points and tie the current series by defeating Afghanistan in Pallekele on Wednesday in what is now a crucial match for both teams.

They registered their first-ever ODI World Cup victory by defeating Scotland in a nail-biting one-wicket victory at University Oval in Dunedin, New Zealand, with Samiullah Shinwari top-scoring with a brilliant 96.

Twitter
Flip
Koo
Previous article
Harrison Ford, Helen Mirren saddle up for 'Yellowstone' spin-off '1923'
Next article
Dravid, Rohit have the responsibility to shield Arshdeep from an overdose of advice: Brett Lee
This May Also Interest You
News