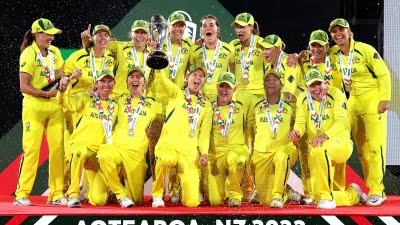 Dubai, Oct 1 (IANS) In the annual International Cricket Council (ICC) update carried out on Saturday, Australia women’s team have established a record margin at the top of the ODI Team Rankings while also increasing their lead in the T20I Team Rankings.

In T20Is, Australia are on 299 rating points, stretching their lead over second-placed England (281) from 14 to 18 rating points. New Zealand (271) and India (266) maintain their third and fourth positions, while South Africa have overtaken the West Indies to fifth position with 246 rating points.

In the T20I matches played in last one year, Australia are undefeated in 14 matches, with ten wins against their name and four ending without a result. Also, they have swept aside India, England, Pakistan and Ireland in a tri-series and ended on a high by bagging gold in the women’s T20 cricket event of the Commonwealth Games 2022 in Birmingham.

In ODIs too, Australia have enjoyed an unbeaten record in the last 12 months. Their 100% win record in 12 games in that period includes a dominating Women’s ODI World Cup win in New Zealand earlier this year.

The gap between the top two might be massive but the fight for the second and third spot is heating up with only three points separating South Africa in second place from England, who are in third.

In other notable movements, Tanzania and Nepal have progressed two slots each to reach 15th and 16th positions, respectively, Namibia have moved up from 21st to 17th and Hong Kong from 24th to 20th.

Meanwhile, the number of ranked teams has fallen from 60 to 48 with eight teams not having played at all over the past three years and four others not meeting the requirement of six matches.

Twitter
Flip
Koo
Previous article
Audience witnesses a new side of Tulsi Kumar in ‘Killer Haseena’ and are loving it!
Next article
Nice to see Salt remain unbeaten, finish the game off in his best innings for England: Atherton
This May Also Interest You
Sports