Big number of participants at Olympics will be vaccinated: Bach 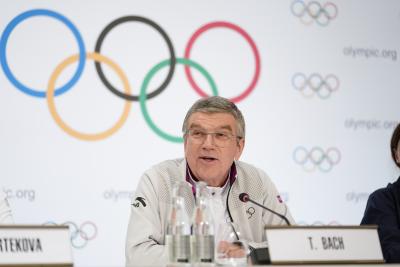 Lausanne, April 22 (IANS) International Olympic Committee (IOC) President Thomas Bach is confident that a “big number” of participants at the Tokyo Olympics this year will be vaccinated against Covid-19.

“I think we can already say now that a big number of participants living in the Olympic village will be vaccinated for own safety and solidarity to the Japanese population,” Bach told a news conference following an IOC executive board meeting on Wednesday.

“But we’ve been encouraging and assisting all the national Olympic committees and Olympic teams to get vaccinated and, in fact, we can see very good process,” he pointed out.

The IOC chief said they are working with experts around the world on a new version of the Olympic playbook, that will be “scientific based and very factual”, and is set to be published at the end of April.

Asked about a visit to Japan ahead of the Games, Bach said it’s “still in the planning phase, so I cannot confirm it. Once the arrangements are made they will of course be made public”.

The IOC also approved its Athletes’ commission recommendation to maintain the ban on podium protests and at the arenas at the Olympics.

Athletes were consulted in a survey and 70 per cent of the participants were against allowing any political, ethnic or religious demonstration, following Rule 50 of the Olympic charter, which prohibits athletes from demonstrating or protesting in certain places at the Games.

“A very clear majority of athletes think this is inappropriate,” head of the commission Kirsty Coventry said.

As further recommendations, the Athletes’ commission named increased information about the consequences of violations of Rule 50.

Due to the coronavirus pandemic, the 2020 Tokyo Olympics were postponed to this summer and are due to start on July 23.

Japan has been struggling with another wave of coronavirus infections and Bach said the IOC was informed about a possible new state of emergency in Tokyo.

Doubts persist as to whether the Games will happen, but the IOC and organizers have ruled out a cancellation or another postponement as “Tokyo continues to be the best prepared Olympic city ever”, Bach said.

A few qualification tournaments for the Games have been cancelled and some athletes have already lost and others may still lose the opportunity to compete in Tokyo.

Bach said “it’s a very difficult situation”, but that the athletes and teams safety must come first.

On Wednesday, Tokyo Olympic organisers hdelayed the decision on how many spectators will be allowed to enter venues.

When asked, Bach didn’t answer if the IOC was planning to host the games without spectator at all.

A survey conducted by the Kyodo news agency showed last week 72 per cent of those polled in Japan want the Olympics cancelled or rescheduled due to the pandemic.

Only 24 per cent supported the Olympics and Paralympics going ahead this year.