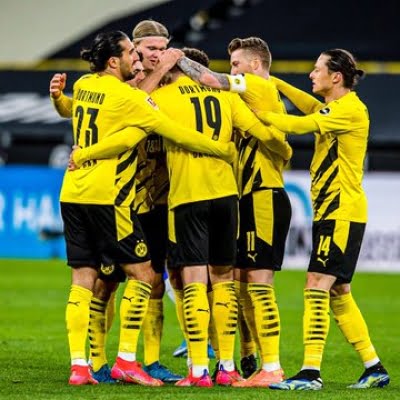 Berlin, April 22 (IANS) Borussia Dortmund remain up and running in the fight for a Champions League spot after a 2-0 home win over Union Berlin.

Dortmund, who in early April were seven points off the last qualification place for the continental competition, are four points behind Eintracht Frankfurt, who currently have the last spot, DPA reported.

Union had a great start and hit the crossbar with only 25 seconds on the clock. But Dortmund got stronger after the scare and took the lead.

The home side were awarded a penalty and Erling Haaland stepped up for the task, but his effort was rejected by Andreas Luthe. The Union keeper, however, couldn’t hold the ball and Marco Reus was in position to send it into the net.

Max Kruse hit the post once again for Union with a free kick but a late goal by Raphael Guerreiro locked in Dortmund’s win.

“We played a good game, had good chances. Max Kruse’s free kick on the post was a key moment. The second goal came at the right time,” Dortmund keeper Marwin Hitz said.

Luthe, meanwhile, was disappointed. “We played a decent game. There was more in it. Dortmund punished us ice-cold.” The keeper also told broadcaster Sky that there was “no clear contact” in the action that led to a penalty to Dortmund.

“That’s too little from my point of view. Marco takes off early and wants the penalty,” he said, while Union chief Oliver Ruhnert added “I can’t say it’s a crystal-clear wrong decision, but it’s debatable.”

Wolfsburg secured a 3-1 triumph at Stuttgart and are now in position to fight for the second place in the standings, sitting four points behind RB Leipzig.

“The suspended players are back, the injured players are returning. I think we’re ready,” Wolfsburg midfielder Maximilian Arnold said.

Andrej Kramaric led Hoffenheim as they came back from being 2-0 down at half-time to beat Borussia Moenchengladbach 3-2. Alassane Plea and Valentino Lazaro led the way for Gladbach, but a Kramaric brace and a goal by Ihlas Bebou secured Hoffenheim’s win.

“This is extremely bitter. It’s a pattern throughout the season that we let up after very good games,” Gladbach defender Stefan Lainer said.

Mainz also moved further away from the relegation zone with a 1-0 win over Werder Bremen, who now sit four points above Hertha Berlin, the first team in the drop zone.

This was Bremen’s sixth consecutive defeat, the most in the club’s history.

On Tuesday, leaders Bayern Munich secured a 10-point advantage at the top of the ladder after a 2-0 win over Bayern Leverkusen and Leipzig’s 2-1 defeat to ailing side Cologne.

Hertha’s game against Freiburg has been postponed as the Berlin club is completing a 14-day quarantine after a coronavirus outbreak among their ranks.