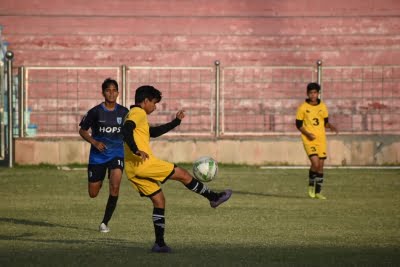 In the semi-finals played at the Dr Ambedkar Stadium on Thursday, Hans Women Football Club beat Signature FC by one goal to nil while Hops Football Club scored a 4-0 win over Growing Stars SC.

In the first semi-final of the day, Hans Women FC took early lead through Anushka Samuel.

The eventual winners made attempts to further increase the lead in the second half of the match but faced stiff resistance from Signature FC.

Towards the end of the match, Signature FC forward-line made inroads into rival territory but the all-important goal eluded them.

In the second semi-final, Hops Football Club combined well to score goals at regular intervals that dashed hopes of Growing Stars FC to enter the final.

Santosh netted two goals while Jyoti and Karuna got one each for the winners.

Twenty teams participated in the league phase of the tournament.

The competition got more intense from the quarter-final stage which was the knock-out stage of the league.