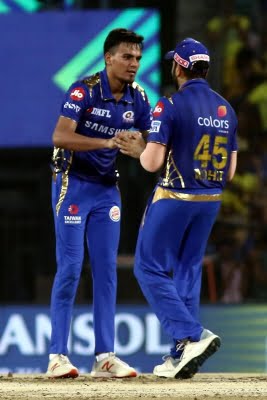 Mumbai Indians, who have a top-level pace battery, featuring the likes of Jasprit Bumrah and Trent Boult, are looking to use Chahar as a wicket-taking option.

“Rahul’s (Chahar) a wicket-taking bowler. You make him bowl those balls that are too good. His role is to come into the middle and spin the ball and create some pressure and take wickets. That is the role we look to make him do,” said Mumbai Indians bowling coach Shane Bond while answering questions from the media.

Chahar, who represents Rajasthan in domestic cricket, has been a member of the Mumbai Indians team and has got into the habit of winning.

“He is doing extremely well. If you look at Rahul he is still an incredibly young man, who has played fair bit of cricket and high pressure cricket in finals and has been a key member of our team. In terms of our team, he has a long way to go. The beauty about Rahul is that when we sit down and do analysis, he is a good listener,” said Bond.

“We are a collective bowling unit. The key to winning championships is a strong bowling attack and I think we have had five international bowlers playing in Mumbai Indians bowling line-up for a long time,” added Bond who also praised Krunal Pandya.

“If you look at our success years, the key was on those top order wickets. But for our spinners to do a containing and wicket-taking job in the middle which is what Krunal [proves] with his stats [that he has done]. Playing at the Wankhede (in previous seasons) and going under seven an over is incredible job for us,” added Bond.

“Krunal and Rahul were sensational in last game.”