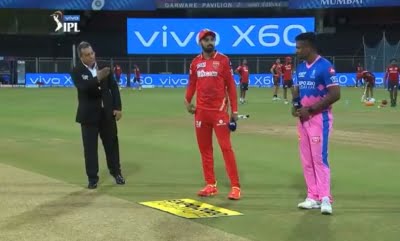 Mumbai, April 12 (IANS) Rajasthan Royals won the toss and elected to field against Punjab Kings in the Indian Premier League here at the Wankhede Stadium on Monday. This is the first match for both the teams in the IPL 2021 season.

This is also Punjab franchise’s first match after they were renamed as Punjab Kings (from Kings XI Punjab) ahead of this season.

Tamil Nadu’s Shahrukh Khan and Australian duo Riley Meredith and Jhye Richardson make their debut for the Punjab franchise while Mustafizur Rahman and Shivam Dube will play their first match for Rajasthan Royals.