So much to learn from Sreejesh: Pathak 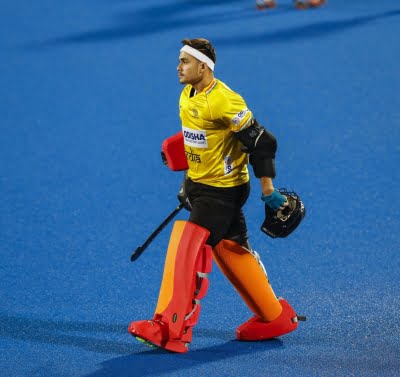 Buenos Aires, April 16 (IANS) India hockey team goalkeeper Krishan Pathak, who was adjudged the ‘Player of the Match’ in his 50th outing for the country against Olympic champions Argentina in the FIH Pro League encounter, says that a tough competition for a place in the team keeps him motivated.

“The competition for places has only made me a better goalkeeper,” said Pathak, who has been Sreejesh’s understudy for much of his career, on Friday.

“There’s so much one can learn from Sreejesh bhai. He’s been playing at the highest level for so many years. I have improved as a keeper in the last four years and that is because of what I have gathered and learnt watching people like Sreejesh and others play and train on a daily basis,” said Pathak ahead of the team’s departure back to India.

On achieving his 50th international cap, who will turn 24 on April 24, said, “It feels like I made my international debut only yesterday. So much has happened in such a short span of time. I have had the opportunity to play in big tournaments and learnt a lot from my seniors. The coaches have always believed in my talent. I want to continue working hard and win games for India. Reaching this milestone makes me proud.”

For the Punjab player, the Argentina tour, where India played a total of six games, was a big “learning experience”. “I know I have to prove my worth as a goalkeeper every time I am playing. I feel we showed a lot of fight and character there. Over the past year, we’ve had good games against the top sides in the world and I feel that gives us the right kind of boost going into a tournament like the Olympics.

“However, we have to be focused on the job at hand right now. Hope our good form continues against Great Britain, with whom we have two FIH Pro League games.”

After a one-week camp at the Sports Authority of India (SAI) centre at Bengaluru, India team will leave for London for the Pro League games on May 8 and 9.