We wanted to erase memories of 2020 and it was the last IPL before mega auction: Ruturaj on historic CSK victory in 2021 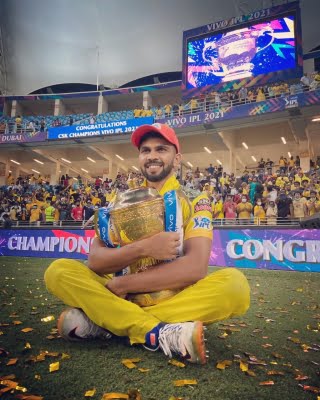 Chennai, Oct 1 (IANS) Charismatic Chennai Super Kings (CSK) batter Ruturaj Gaikwad has revealed that the second-most successful IPL side was determined to win the trophy in 2021 for two reasons — to make up for the seventh-place finish the previous year and also the team knew it was going to disperse in the 2022 mega auction.

Ruturaj played a key role in CSK lifting the trophy in 2021, amassing 635 runs in 16 matches, including an unbeaten century and four half-centuries as the MS Dhoni-led side won its fourth IPL trophy.

“I think as long as I remember, the 2021 season actually I was pretty much really focused on winning the trophy because you know because of mainly the two reasons I feel were in 2020 where we lost and 2021, I think it was going to be the last year of the cycle and with the kind of players we had, we kind of knew that we’re not going to get the same team together. And the kind of… all these players playing together for almost four years, six years or eight years,” said Ruturaj on chennaisuperkings.com.

“So, I think, somewhere it was going to be a breakdown for all. For that reason, everyone came together and I remember one moment very clearly where we were playing the first game and Mahi bhai went in to bat and I think in the first or second ball he was in a situation where he was close to getting run out and he dived in that situation.

“So, I think not many times, it just happens in the moment. But to show that effort right from the first game and to show that intent to, you know, to do something or achieve something. I think that clearly sent a message to everyone that if this guy wants to win it so badly then obviously, we have to step up ourselves a little higher than what we are. I think in that sense that really created the base for the process or the thing that we wanted to do,” added Ruturaj.

India player Shardul Thakur, who was Ruturaj’s teammate in 2021 and one of the key bowlers for the side with 21 wickets in 16 games, added it was a special year for him in the yellow jersey because of the way CSK were able to make a turnaround after the dismal showing in 2020 and also coming back strongly after losing three successive games in 2021.

“A special year because we were able to turn the tide. Not often do you see that a team has lost three games in a row and they make it up from there and win the final. And, final… even the final game I remember I mean yes, we got 190 on the board, but there was so much dew coming in,” said Shardul, who was bought by Delhi Capitals for Rs 10.75 crore in the 2022 IPL mega auction.

“We never thought that ok we would win, because everything was going against us. Shubman (Gill) hit one ball in the air, it touched the Spidercam and the decision was overturned. You know, again… we were in a huddle, and we knew that it is going to be not out. So, we were thinking what is going to happen next, and for a moment everyone was clueless but myself, Bravo, and Mahi Bhai (Dhoni) we were standing together, and Bravo said okay they are scoring at a good rate, they are no loss (on the board). I am telling you we have to bowl death overs now and push them as much as possible. Take the game towards the end. I don’t know what was Mahi Bhai thinking he just sent Bravo to Long off, like go back, and he asked me what do you want to bowl?” elaborated Shardul.

“I said you tell me, I am comfortable whatever you ask me to do. So, the way I answered he said ok do one thing. Keep mid-off in the circle and let us see what happens. The very next ball Venkatesh Iyer got out, then Nitish Rana got out, then we suddenly got the momentum from there. Yes, I bowled well but again the greatness of the man to think in such a tense situation. Such a tense situation also he has brought some kind of reasoning and result in that very moment.”

Shardul said the moment of victory will remain with him all his life as it was a truly amazing win.

“So, I mean yeah and finally when we lifted the cup it was emotional because I had seen the 2019 loss and I was the face of the loss because I was the one to get out on the last ball. So, winning 2021 was amazing. It was emotional, and then I felt like ok there was a burden on my shoulder and suddenly that burden is gone away now, because I had contributed in the final by taking three wickets. So, there was some kind of performance which will help the team to win the game. So, you know suddenly I was feeling on top of the world.”