Salman-Katrina’s BHARAT to hit a hundred today, Devgn’s DDPD is a semi-hit! 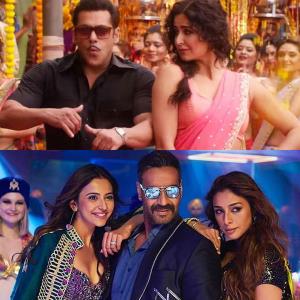 The doomsday prediction of the naysayers about BHARAT crashing second day  onward, turned out to be an exercise in futility! Yes, after a huge 42 crore opening day the Salman-Katrina venture BHARAT saw a steady run netting 30 crore on the second day and around 23 crore on the third.

The 3-day total of Ali Abbas Zafar directed film stands at over 95 crore (approx.), and had it not been for the all important India-SA match on the release day, BHARAT would have been well over 100 crore by now.

The film has also impressed in the overseas grossing $2m on the first day itself, despite a sizeable section of the Pakistani audience keeping away, perhaps due to the title BHARAT!

What is now certain is that BHARAT is all set to be a success, how big or small, time will determine.

Meanwhile, Ajay Devgn’s DE DE PYAAR DE managed to keep afloat even in the third week ( shortened by the release of BHARAT on Wednesday) and has netted 90 crore (to be validated) thus far, and is now a semi-hit. The film has also performed quite well in the overseas, especially in the US.