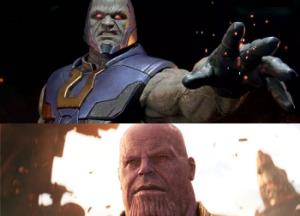 Thanos is one such character who has been associated with the MCU for a very long time. Now with the Avengers on we saw that Thanos did face a lot of challenges and also we saw that although his grit and determination to destroy the world was almost successful, he had failed when the combined force of Avengers took over him and his army in a one to one battle. All thanks to Captain America, Ironman and few other heroes who took the courage of taking over Thanos

Now the question arises, will Thanos be able to face Darkseid?

Darkseid who can and will surely take over Thanos is one such character that Thanos should not mess around. Speaking on Darkseid, he can be considered as the Thanos of DC comics and is also the well known foe of Superman. What if this very foe of Superman comes face to face with Thanos.

Just imagine a fight against Darkseid will be equally tough for Thanos. Even with his infinity gauntlet on, we can assure you that it would be no match to the omega beams of Darkseid. The Omega Beams are one such powerful rays emitted by Darkseid in a similar fashion as the way Superman emits rays of light from his eyes.

Even without touching Thanos, Darkseid can surely beat him and Thanos would understand the wrath that Darkseid can lay upon him. In fact, he could easily take down Avengers but he will not be able to take over Darkseid

So now the question arises, what is your opinion on Darkseid VS Thanos?

Twitter
Flip
Koo
Previous article
Friendship Day: Movies that give us Friendship goals
Next article
Stars silent over Sirsa’s open letter to #UdtaBollywood
This May Also Interest You
News