Angry 'side' of Dravid catches Kohli by surprise 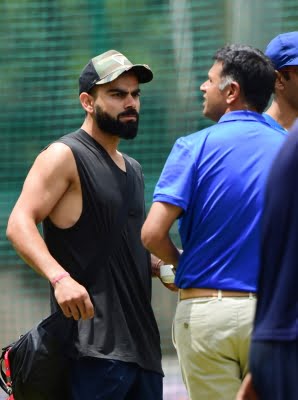 New Delhi, April 9 (IANS) Rahul Dravid was always known for his calm demeanour on the field and off it. But a new angry version of former India batsman, known as ‘The Wall’ for his stout defence, has caught even the angry young man of Indian cricket, Virat Kohli, by surprise.

In an adverstisement of a credit card payment app, the former India batsman and captain is seen getting hassled as he is stuck in Bengaluru traffic.

“That doesn’t mean you can overtake,” he is seen shouting at a driver on the road.

He is then seen challenging another driver, “come man…come”, gearing up for a fight while stuck in traffic jam.

The cherry on the cake is the last line where he says, “Indiranagar ka gunda hoon mein (I am a thug from Indiranagar).”

While it left many fans on Twitter in splits, Kohli quoted-tweeted the advertisement, expressing surprise.

“Never seen this side of Rahul bhai,” said Kohli on his Twitter handle, @imVkohli.

Former India and Karnataka teammate Dodda Ganesh tweeted, “The last time Rahul Dravid shouted like this was, from the Karnataka dressing room, and I was at the receiving end. “Innu ondu Run ide kano (There is one more run) @imVkohli.”