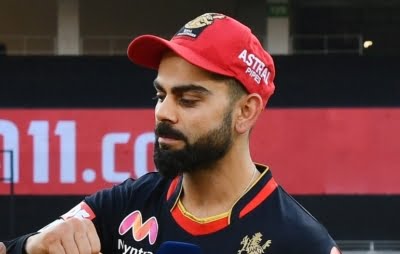 Chennai, April 9 (IANS) Royal Challengers Bangalore (RCB) used as many as seven bowlers against Mumbai Indians (MI) to restrict them to 159/9 in the Indian Premier League (IPL) season opener on Friday.

Former India batsman and now commentator Sanjay Manjrekar tweeted, “Not 6 not 7, RCB have 8 serious bowling options tonight. They would do well to stay in the moment & let the bowler having a good night bowl his full quota. #MIvRCB #IPL2021.”

The eighth bowler they didn’t use was Australian all-rounder Glenn Maxwell who they had picked for Rs 14.25 crore at the mini-auction ahead of this season.

As it turned out, the huge number of options paid off for the India skipper eventually. Even as two of his bowlers, left-arm spinner Shahbaz Ahmed (0/14 in one over) and Aussie all-rounder Daniel Christian (0/27 in two overs) went for runs, Kohli could fall back on the other bowlers.

Mohammed Siraj (5.80 runs per over) and Kyle Jamieson (6.80) were very economical while Harshal Patel was the star picking five wickets for 27 runs in his first four overs. All three as well as the expensive Yuzvendra Chahal were the only ones to bowl their full quota of four overs.

Washington Sundar chipped in with just one over and picked a wicket — of top-scorer Chris Lynn. Sundar was brought in the 13th over after Christian, Ahmed and even Patel had gone for runs in their opening overs. Besides picking a wicket to change the momentum, he also conceded just seven runs.