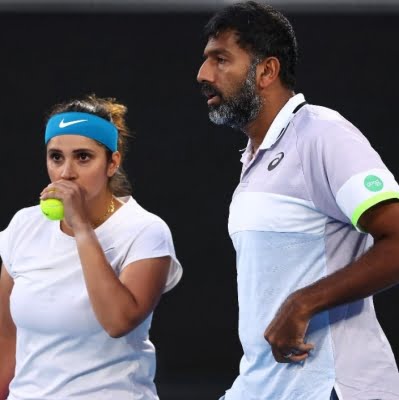 Melbourne, Jan 26 (IANS) Indian tennis star Sania Mirza, who is playing the last Grand Slam of her career, admitted that her mixed doubles final run in Australian Open is “so emotional” adding that there’s a lot of nerves playing her last major.

“We were playing one of the best mixed doubles teams on tour and we knew we had to come up with the best – I’m glad we were able to do that. It was an amazing match, obviously there’s a lot of nerves playing my last Slam and it’s so special to play with Rohan,” Sania said.

“Rohan was my first-ever mixed doubles partner when I was 14 years old … we’re so excited to come back here and give ourselves another chance, added the Indian ace, who plans to retire later this year.

Interestingly, Sania claimed her first major in 2009 at Melbourne Park, when she teamed up with Mahesh Bhupathi. And she will end her illustrious Grand Slam career here on Saturday.

“I’m so emotional – I’m not a crier in front of people, but I’m almost there right now. I feel the love here, for the 18 years that I’ve been coming here it feels like home for me because honestly, I’ve got family here, I eat at home, I get so much home food and I have all these Indians coming out and supporting me. It’s been quite a journey, and I’m really going to miss coming back here,” she said.

With Sania gunning for her third Australian Open and seventh Major, the Indian pair will cross swords with Brazilian duo Luisa Stefani & Rafael Matos in the final on Saturday.

The 42-year-old Bopanna said “It’d be an absolute dream” to clinch the winner’s trophy with the six-time Grand Slam champion.

“You can’t get anything better than that – to finish her last slam with a title, I think it’d be really special. We need it in India, we need to keep inspiring everyone back there,” he said.

Saturday’s final will be the perfect Grand Slam farewell for Sania as earlier this month she announced her retirement from professional tennis after the Dubai Tennis Championships, a WTA 1000 event, which begins on February 19.