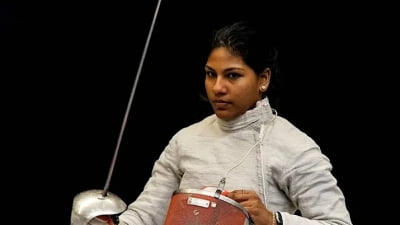 “When a teacher in her Muruga Dhanushkodi Girls’ Higher Secondary School, Tondiarpet here had asked the students to sign up for sports Bhavani signed for squash and fencing just to be away from the classroom,” remarked her mother C.A. Ramani to IANS.

That small girl who wanted to be away from her class despite being a bright student is now 26 year old, an MBA graduate and is largely outside India training with a target to win a medal in the Olympics.

She is also the first Indian fencer to qualify for the Olympics.

“She is now in Italy and training. She scored good marks in 10th class and 12th. She has completed MBA,” Ramani added proudly.

Born into a big family – Bhavani as she is called has two brothers and two sisters- her father C. Anandha Sundhararaman was a purohit.

“Fencing is a very costly sport. The dress itself would cost a bomb. Initially the cost was bearable as we got her the local gear. But once she started progressing to state and national level then the sports dress itself cost about Rs.1.5 lakh,” Ramani said.

Fortunately, none in the family murmured about the sporting expense though it impacted the entire family.

“The girl had chosen a sport and was progressing well. We decided to support her. We borrowed a lot and the interest payout itself ran into thousands as there were training and travel expenses,” Ramani said.

But there came a point when Ramani herself felt it was not possible to support her daughter’s sporting expenses-international travel, training and others.

The GoSports Foundation, Bengaluru came to her rescue.

“It was in 2016 Tamil Nadu late Chief Minister J.Jayalalithaa included Bhavani under the Special Scholarship Scheme for Elite Sports Persons. Under the scheme a sports person will get an annual financial assistance of Rs.25 lakh for training,” Ramani remarked.

A year earlier, Jayalalithaaa had announced Rs. 3 lakh incentive to Bhavani to train in the US.

According to Ramani, the financial burden got reduced after that as she was able to draw an advance under the scheme towards expenses to be incurred.

Till her national level, Bhavani was trained by Sports Authority of India’s (SAI) coach Sagar Suresh Lahu and now she is trained by Nicola Zanotti.

Accompanying her daughter during her travels and watching her wield the sword, Ramani has picked up the rules of the game.

“The game lasts for just 10 minutes. It is more of a mind and energy sport.

“As for her food, she eats less rice, lots of dry fruits. She cooks her food. She has been in Italy for the past five years,” Ramani said.

One of Bhavani’s unforgettable events is the night she had spent at a Chinese airport, as she was not able to withdraw cash from an ATM.

“She had only a debit card. Her card got blocked for some reason. The next morning the issue was sorted out,” Ramani said.

“It is seventeen years of hard work for Bhavani. I am sure that she would win an Olympic medal. Even as a school girl, she was disciplined to get up early and go for training and then to school,” Ramani the proud and confident mother signed off.

Venkatachari Jagannathan can be contacted at v.jagannathan@ians.in)