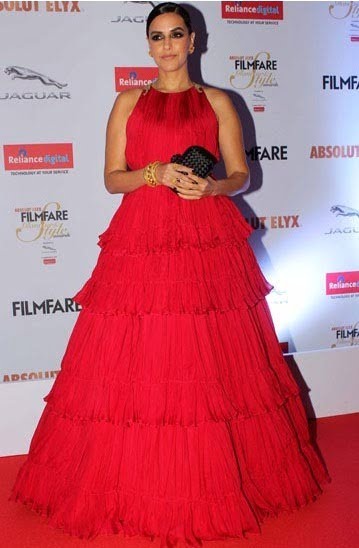 From the film world to a podcast show, judging television non-fiction entertainers to running a marathon – Neha Dhupia is doing it all. The actress and former beauty queen says entering the film industry was an adventurous step she took around 20 years ago, but staying relevant during all these years has been quite a task.

Neha, who made her screen debut with a Malayalam movie in 1994, and forayed into Bollywood with QAYAMAT: CITY UNDER THREAT in 2003, has been doing non-fictional shows like "MTV Roadies – Roadies Xtreme", podcast "#NoFilterNeha" and other chat shows, apart from movie projects of late.

She told IANS: "There are so many TV shows that go off air within three months of their beginning. MTV Roadies is one of the adventures TV shows that has earned the credibility of 15 years from its audience. And I am the only female judge on the show.

"I earned the show because of my body of work. Staying relevant for 20 years is challenging."

As for adventures in her own life, she said: "I think the most adventurous thing that I have done in my life is to become part of the Indian cinema industry, being a complete outsider. So today, when I am getting an offer of one of the longest-running youth show on Indian television, it is purely a by-product of my credible work in the industry.

"I have enough and more stories to share. At the same time, I have a lot of gratitude for what I have got."

Neha actively participated in the Mumbai Marathon and is also associated with charitable social work.

As for her film career, she featured in a supporting role in TUMHARI SULU last year and, this year, two films are in the pipeline for her.

"I have signed Pradeep Sarkar's upcoming EELA where I am sharing screen space with Kajol. That apart, I have acted in a short film directed by Karan Johar. It is part of the anthology film BOMBAY TALKIES 2, she said.

"Roadies", where she is one of the "gang leaders", keeps her kicked. She began her association with the show in 2016, and its new season is set in the northeast.

"This show reflects the competitive side of my personality. I have come across many youngsters in the show and some of their stories are really heart-touching. The show is an honest space because everything is real here, people and their stories," said Neha.

Asked if she also wants to explore the fiction space on TV, Neha said: "No, I won't be able to commit myself to a fictional show. That is a huge time-consuming commitment."