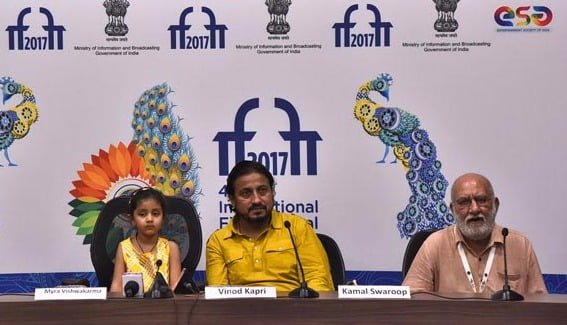 Piquing the curiosity of everyone in attendance was PIHU which revolves around a 2-year-old who fails to wake her
unresponsive mother and takes to exploring the spacious apartment looking for food, while periodically getting
distracted from her chores by nervous phone calls from her father trying to reach his wife. Keeping the viewers on the
edge of their seats, the movie showed much promise, inciting gasps and laughter as the suspense gradually
heightened in the plot.

Talking about the film, director Vinod Kapri said, “PIHU is a special film not because its protagonist is a two-year-old
child or that she is the only character in the film, but because the crew and the child's family lived in the same
apartment for a while to get her attuned to the film. It is a great opportunity to showcase my film at IFFI Goa 2017.”

The other opening film also garnered much intrigue as filmmaker Kamal Swaroop returned to cinema after three
decades with PUSHKAR PURAN, a film about lake city Pushkar in the Thar Desert of Rajasthan. The movie
showcases how in the month of Karthik, the city turns into a mirage-like fair, with villagers, folk artists, musicians,
cattle, camels, horses, ferris-wheels and merry-go-rounds.

Speaking before the screening of the film, director Kamal Swaroop said, “Thank you to everybody – the Jury, the IFFI
organizers and others. I have liked the Festival very much. I am lucky. This is my second opening film in the Indian
Panorama.”