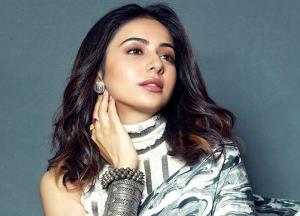 Actress Rakul Preet Singh reveals she will have a working Holi this year.

"I am shooting on the day of Holi," she informed when asked about her Holi plans, before getting nostalgic about how she spent the day of colours as a child. "We used to play a very nasty Holi in my childhood. People would throw eggs on me! I stopped playing Holi in class IX or X, because you become aware of how much water is wasted. It's not worth it and it damages the environment. Since then, I've only played dry Holi, I meet my family and friends and eat a lot of sweets and other dishes," she recalled.

Does she have the Holi sweet tooth? "I used to like gujiyas a lot but now I can't eat gujiyas due to my fitness regime. I can't play with water and colours so, I prefer working on a festival," she replied, while interacting with the media at the 8th edition of Cheryl's Femina Ms Stylista West 2020.

Meanwhile, Rakul Preet has a busy year ahead, after impressing all with her roles in "Marjaavaan" and "De De Pyaar De". She confirms signing filmmaker Indra Kumar's yet-untitled film, which apparently co-stars her "De De Pyaar De" co-star Ajay Devgn and "Aiyaary" co-actor Sidharth Malhotra. Shooting for the film will start in April, the actress said.

That apart, she will be seen alongside John Abraham and Jacqueline Fernandez in "Attack", will also feature in Kamal Haasan's "Indian 2" and also star in Kaashvie Nair's untitled project this year, apart from a project down South.

"There is the (untitled) film that I am shooting with Arjun (Kapoor). So, I am shuttling between that film, 'Attack' and 'Indian 2'. After that, I will get into a film in which I am working with Indra (Kumar) ji in April, once I wrap up shooting of these two films," Rakul Preet revealed,

Twitter
Flip
Koo
Previous article
Sanjivani: Surbhi Chandna is Holi ready in a white attire
Next article
Is Katy Perry expecting her first child with Orlando Bloom?
This May Also Interest You
Technology