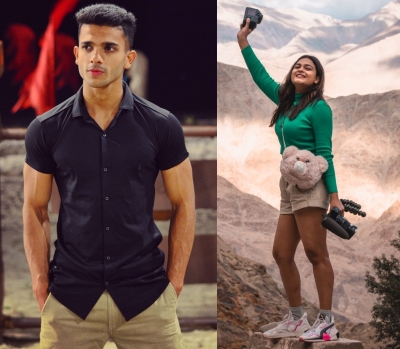 As the youth-based reality show ‘Roadies’ Season 18 is all set to begin, insiders of the show Vishakha Fulsunge and Abhimanyu Raghav, highlighted those elements that will make this season different and also about Bollywood actor Sonu Sood as a new host, replacing Rannvijay Singh.

While Vishakha is a motor vlogger, Abhimanyu Raghav is a health and wellness coach. He gained popularity after appearing in MTV show ‘Roadies Revolution’ in 2020.

Vishakha says: “I think this time MTV ‘Roadies’ is so unpredictable. Everything is going to change plus it is international, so audiences are going to see South Africa and the fun that we indulge in across the season. I think that fans can expect to witness more than what they usually expect from Roadies. This year, the show is going to be full of surprises.

Abhimanyu adds to the conversation, saying: “‘Roadies’ will grow beyond its original definitions. Your view of the show is going to change surely. It will be very unpredictable and it’s going to be a lot of fun. This season will have more Roadies spirit.”

As ‘Roadies 18’ insiders, Abhimanyu and Vishakha will be, getting inside gossip out of the contestants because whatever happens in the whole day generally, the audience get to know only the one hour in form of the episode that is shown to them but there is lot more that encompasses the whole game of ‘Roadies’.

“So, we will be the one who will be getting you that information as to what happened because of whatever led to whatever you see on television. What was the prerequisite of it being a vote out or it being something you know like a fight or a very good task,” shares Abhimanyu.

He continues about their roles: “How is the show made, so we will be very closely working with the production team, with the crew, with the people who are making the whole show, the DOPs, the people who are responsible for the tasks, task creations. We will be trying the task out and understanding the whole show as how it is made. I think it is like giving everyone a glance into the creation of Roadies and discussing the incidents in a more detailed manner.”

Vishakha shares further: “You will see us exploring South Africa, different cities, different terrains, and our journey unfolds as the show progresses.”

For so many years, Rannvijay was part of the show and now there is Sonu Sood who has taken over as the host. Vishakha feels that Sonu Sood’s entry made everyone comfortable.

She recalls a few moments with him on the sets and says: “I think when Sonu sir entered, his vibe and his aura was so nice that everyone instantly felt comfortable so instead of greeting him we were straight away like ‘sir where are our samosas please give us that’.”

“He is full of positive energy and makes everybody comfortable around him. I still remember the first time he interacted with the contestants, he took ten minutes to interact with each contestant to understand them and had a good conversation with them. Everyone was happy. Sonu Sir has already said that this year he wants to raise the level of the show and push contestants to perform their best. He wants to see if each contestant has what it takes to survive this new season of ‘Roadies’.”

Vishakha is happy to be an insider on the show and shares her journey before joining ‘Roadies 18’. She has been a YouTuber for the last five years and it’s been more than a decade that she has been riding a bike.

“I am a motor vlogger. I hold three records and two are on the way in the India Book of Records. So, my life has been like the life of a Roadie. Most of the time I am travelling. I enjoy solo rides and keep exploring the country. I vlog my journey and show my audience the beauty of our country. I keep travelling most of the days, I am not at home.”

“I come to my place in Mumbai only for two days when I pack and unpack and meet my family and friends and then I am off again. But this is international, so I am getting to travel abroad and there are bikes around me. Also my co host is amazing and everyone is very nice over here so all in all I am enjoying it a lot.

Abhimanyu before ‘Roadies Revolution’ had completed his certification in health and wellness coaching.