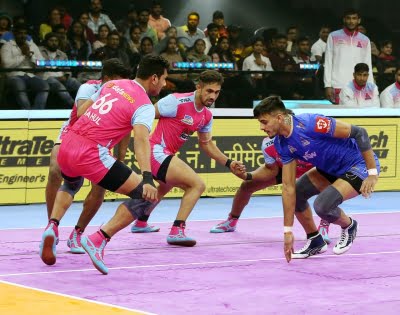 Hyderabad, Dec 5 (IANS) The Jaipur Pink Panthers put on quite a show en route to their 44-30 victory over the Haryana Steelers at the Gachibowli Indoor Stadium here on Monday. With this victory, the Pink Panthers confirmed their place in the Pro Kabaddi League (PKL) semifinals.

In what was a slow start to the contest, the Jaipur Pink Panthers got the better of their opponents in the early exchanges, edging into a slender two-point lead after the first three minutes.

The Jaipur Pink Panthers were doing well to keep both Meetu and Manjeet in check, however, it was Rakesh Narwal, who was helping the Haryana Steelers kick on.

It was a slow start to the second half, beginning with a few empty raids. However, soon after the Jaipur Pink Panthers’ unit were out of the blocks faster than the Haryana Steelers, picking up the first points.

The Jaipur Pink Panthers continued to add to their lead and took control of proceedings, not allowing the Haryana Steelers’ raiders any space.

Lucky Sharma and Sahul Kumar pulled off a fantastic tackle on Manjeet in the 29th minute and from thereon, the Panthers took the match away from the Steelers. Meetu, Manjeet and Rakesh were finding it tough to get their raids in as the Panthers continued to stretch their lead.

Manjeet and co threw the kitchen sink in the final few minutes of play, but the Jaipur Pink Panthers kept them at arm’s length, not allowing any hopes of a comeback. Eventually, the Panthers proved to be too strong a unit on the day and walked away with a comprehensive victory.