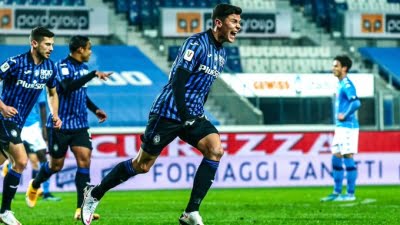 Rome, April 19 (IANS) Atalanta broke a 20-year curse to end their winless run against Juventus as they managed a 1-0 home win in the head-to-head race for third place, the first victory over the Bianconeri in Serie A since 2001.

Juve had a record of 32 consecutive games unbeaten against Atalanta, the two sides ranked third and fourth respectively before Sunday’s game, with only one point separating the two teams, Xinhua reports.

Both sides created chances but failed to break through with poor finishing. The game looked to be headed for a goalless draw, but an unlikely hero emerged in the 87th as substitute Ruslan Malinovskyi tried an attempt from outside the box that took a deflection off Alex Sandro to go beyond a helpless Wojciech Szczesny.

The win saw Atalanta leap over Juve to third place with 64 points, while the Old Lady dropped to fourth with 62.

In another highly-participated fixture, Inter Milan saw its winning streak come to an end after a 1-1 draw with Napoli.

Inter entered Sunday’s game with 11 consecutive wins. Romelu Lukaku missed a great chance for Inter as his attempt rattled the woodwork. While at the other end Samir Handanovic’s howler allowed Napoli to take the lead in the 36th minute as the shot-stopper accidentally palmed a cross into his own net.

The Nerazzurri got back on level terms in the 54th minute as Kostas Manolas’s clearance only fell into the path of Christian Eriksen to hit in a missile.

Matteo Politano almost scored the winner against his former club, but only saw his scorcher hit the woodwork.

Despite the draw, Inter still lead the table with 75 points, 9 points ahead of AC Milan who conquered Genoa 2-1 on Sunday.