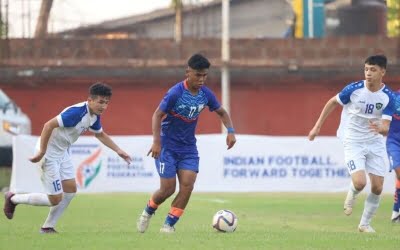 New Delhi, Jan 24 (IANS) The India U-17 men’s national team, after a convincing 2-0 victory, is all set to take on Uzbekistan U-17 at the Tilak Maidan in Vasco da Gama, Goa for their second friendly match on Tuesday.

The Blue Colts performed admirably against Uzbekistan, who had won the AFC U-16 Championship (now known as the AFC U-17 Asian Cup) 11 years ago. Speaking to the-aiff.com on the eve of the match, India head coach Bibiano Fernandes stressed the importance of maintaining composure despite the win.

“The last victory gave a lot of confidence to the boys, but it is up to us to keep them level-headed. Uzbekistan are a very good side, who play a very quick game. They have the capability to spring a surprise any time in the next game, so we need to have our guard up,” said Fernandes. Having said that, the last match gave us a very good gauge on where our team stands.”

Two first half goals by captain Vanlalpeka Guite and Lalpekhlua handed India the lead, which the Blue Colts successfully defended in the second half. While there were certain individual performances in the second half by the boys, Fernandes chose to focus more on the team effort.

“It was a very good team performance by the boys, and that is exactly how they must continue in the matches to come in the future. Only if we fight together as a unit, will we be able to take on teams that are at a higher level,” he said.

The India U-17s are currently preparing for the AFC U-17 Asian Cup Thailand 2023, having secured qualification last year. Fernandes believes that putting the boys in more match situations against quality opponents will help his team get to the required level.

“These matches are extremely important for us to get the team to a level where we can do well in the AFC U-17 Asian Cup. Last time we made it to the Round of 16, and this time we would like to go one step further,” said Fernandes.