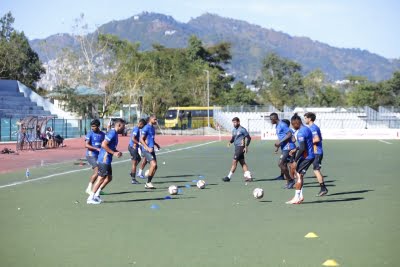 Hyderabad, Nov 26 (IANS) Sreenidi Deccan FC will hope to breach the defence of double defending champions Gokulam Kerala FC when they lock horns in an I-League 2022-23 match at the Deccan Arena, here on Sunday.

The home side will be high on confidence after picking up two wins in their last two fixtures, the most recent of which was a 1-0 victory against TRAU FC. The visitors have had a solid start to the season as well, playing out a goalless draw in their last outing against Real Kashmir FC.

The Malabarians have not conceded a goal in their opening three games and remain unbeaten so far. The two teams faced off twice last season, picking up one victory apiece.

At the pre-match press conference, Sreenidi Deccan head coach Carlos Vaz Pinto declared his ambition to make it three wins in a row.

“It was important for us to get the clean sheet against TRAU and step by step, we have improved our defensive organization. Against Gokulam, it will be a good match against two strong teams. No team has won three matches in a row so far and that is the challenge for us. We know we have to be strong and focused. We will play the way we usually do and make adjustments to our strategy according to each opponent,” said Pinto.

Defender Dinesh Singh stated that his team is ready for the challenge.

“We played well in the last match and feel confident. We are ready and focused for tomorrow’s match. We will give our best to try and win. Gokulam are the defending champions but we know we must give our 100 percent and fight to get the victory,” he said.

On the other hand, Gokulam Kerala head coach Richard Towa spoke about the importance of prioritizing the result over the number of goals scored.

“Each opponent is strong this season and motivated to defeat us. I am grateful that we have not conceded any goals so far. As far as scoring is concerned, it is not each to create chances and the result is more important. It is better to win 1-0 than draw 3-3. I am expecting a very difficult game, not only for us but also for the home team. They are a quality team with strong players and a good professional setup. We come here with the ambition of three points,” said Towa.

Midfielder Juan Carlos Nellar, playing his first season in India and the Hero I-League said, “I am pleasantly surprised with the level of the Indian players in this competition. They have a lot of quality and it’s a very competitive tournament. All teams are tough to face and each match is difficult for us. Tomorrow, we are expecting another similar match and hope to win.”