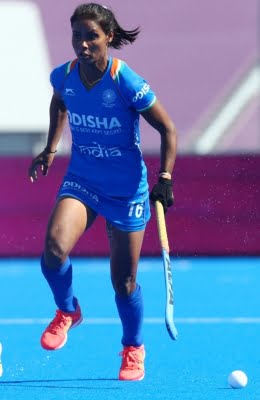 New Delhi, Sep 30 (IANS) The Indian Women’s Hockey’s experienced striker of over 250 internationals caps Vandana Katariya believes the team is on the right path of progression as they have stepped up their performance from tournament-to-tournament this season.

Today being the last date to vote for these respective categories, Vandana expressed the team’s excitement and urged people to back her teammates. “I feel we are making the right strides. About three or four years ago, the team rarely made the cut for any awards as our performance was not up to the mark. But now, we have been making the right progression in international hockey and our performance is being recognized,” she expressed.

She has also requested her fans to support the nominees from the Indian Men’s Team, she said. “It’s great to see players from both Men and Women’s Team being nominated. I am hopeful and in fact confident that the Indian fans world over will vote for them and help them win.”

While awards bring with it great motivation as well as expectations, Vandana said that the team remains grounded and focused on the task ahead. “While it feels great to receive this kind of recognition which shows that our performances are on par with some of the top teams of the world, we are still grounded and focused on our own targets. We have set short-term and long-term goals for the team and we are ticking the boxes, one-by-one,” she said.

The team’s next major international outing will be in December at the FIH Hockey Womens Nations Cup but their biggest aim at the moment is to win a direct qualification for Paris Olympic Games by finishing on top of the podium in Asian Games scheduled for next year in China. “Everybody’s aim is to win the Asian Games next year and, in the lead up to that it is important we keep up the right momentum by doing well in tournaments like the Nations Cup which will help us qualify for the FIH Pro League matches. I would say, we are on the right path,” she concluded.