Pakistan team departs for tri-series in New Zealand; fans not enthused after loss to England 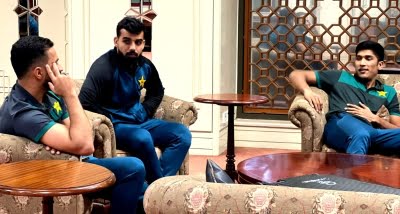 Lahore, Oct 3 (IANS) The Pakistan cricket team led by skipper Babar Azam left for New Zealand for the T20I tri-series involving the hosts and Bangladesh on Sunday night, with fans expressing mixed feelings following their 4-3 T20I series loss to England at the Gaddafi Stadium just hours before their departure.

Pakistan will play their opening match of the New Zealand tri-series against Bangladesh at Christchurch on October 7, followed by a match against the Black Caps the next day at the same venue.

However, Pakistani fans took to social media to express their displeasure the moment the Pakistan Cricket Board (PCB) posted images of the team’s departure hours after the team’s series loss to England.

England thrashed the hosts by 67 runs to take the seven-match T20I series 4-3, dealing a huge blow to the morale of Babar Azam’s side ahead of the T20 World Cup in Australia from October 16.

“Pakistan team departs for the T20I tri-series in New Zealand. #NZvPAK #PAKvBAN,” tweeted PCB, to which a fan wrote, “Babar azam captaincy is concerning. NZ are currently favourites to win the series.”

Another fan tweeted, “Losing against Sri Lanka in Asia Cup twice including final. Almost lost against Afghanistan. Lost the series against England on our home soil but still we feel that our team is best team In world,” tweeted another fan.

Pakistan’s fortunes in the T20 World Cup will depend on the opening pair of Babar Azam and Mohammad Rizwan firing and pace bowler Shaheen Shah Afridi being fully fit for the showpiece event.

Pakistan had reached the semifinal in the previous edition of the T20 World Cup in the UAE before losing to Australia.