Phil Salt praises England team-mates and management for backing him 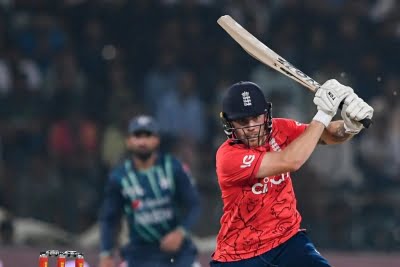 Lahore, Oct 1 (IANS) England batter Phil Salt has praised his team-mates and management for their backing of him and giving him the needed clarity after his blistering 88 not out off just 41 balls helped the visitors chase down 170 against Pakistan in sixth T20I.

“It’s nice timing to do it when the series is in the balance so I’m very happy with the knock. I’m very grateful for the backing that I’ve got from my team-mates and the management. It’s very clear the way they want me to play. Definitely (my best T20I knock),” said Salt after the match ended.

After scoring 59 runs in five innings on tour, Salt reached his half-century in only 19 balls, the third fastest fifty by an England batter in T20Is and brought up the fifty of the opening stand with Alex Hales in just the first three overs of the chase, making the result a foregone conclusion.

“It’s always a challenge at the top of the order when you feel you’re playing well but picking out fielders and finding ways to get out. The way I play is aggressive and I want to win as many games as possible while I’m in an England shirt. It’s very simple: we want to go out there, be on the front foot and put teams on the back foot,” added Salt.

Through his ultra-attacking style of play, Salt treated every Pakistan bowler with disdain, including taking 32 runs off the 15 balls he faced off left-arm spinner Mohammad Nawaz. Salt’s knock means he has made a real push to open the batting when white-ball skipper Jos Buttler returns to eleven.

“You need competition, the best sides in the world have that. You can’t get away from that, and that’s the same in every sport. Everyone’s trying to put their best foot forward and show the coaches how good they are,” concluded Salt.

Former England cricketer Mark Butcher, currently commentating on the series in Pakistan, said to Sky Sports on how much impressed he was with how Salt improved his off-side game in his magnificent knock at Lahore.

“Brutal, call it what you like. Some of the hitting was ferociously hard, flat sixes over square leg, the shots down the ground. He is able to generate alarming speed when the hands come through and he hits it as hard as anybody.”

“He has really improved his off-side play in the last year or so. He was predominantly a leg-side player who looked to shovel everything into the leg-side, but he can now bang it over extra cover if bowlers go wide to him.”