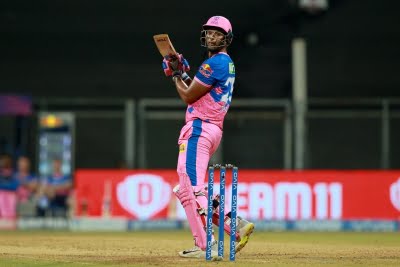 Mumbai, April 22 (IANS) Despite having backs to the wall after being reduced for 43/4 in 7.2 overs, Rajasthan Royals’ (RR) lower-middle order batting came good, and powered their team to 177/9 in 20 overs against Royal Challengers Bangalore in an Indian Premier League (IPL) match here on Thursday.

RR skipper Sanju Samson (21 off 18 balls) fell immediately after the powerplay, lobbing a simple catch to Glenn Maxwell at short mid-wicket of the bowling of Washington Sundar. Samson had hit a six on the previous delivery from Sundar. This was Samson’s third successive failure after a century in his team’s first match against Punjab Kings.

Both Dube and Parag added 66 for the fifth wicket to take the team past the 100-run mark.

Tewatia then provided the late fillip to take the team to 170 before he was dismissed.

For RCB, Siraj took three wickets for 27 while Harshal Patel took three for 47.