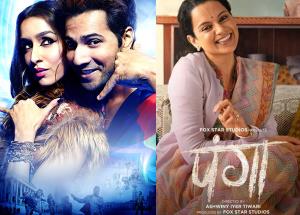 This week’s face off between the Remo Fernandez directed STREET DANCER 3D and Ashwini Ayer Tiwari’s PANGA, expectedly turned to be heavily in favour of the former.

While the Varun-Shraddha starrer opened to a 20-25 percent start, with an estimated first day of 11 crore,  Kangana Ranaut’s film managed a 10-15 percent occupancy and the first day appears to be around the 3 crore mark.

Having said that, both the films saw an upward tick during the latter shows and also carry good word-of mouth, backed by ‘tilting towards positive reviews’ and the collections are likely to improve as the days progress.

Meanwhile after a good first-week haul (116 crore) Ajay-Saif’s TANHAJI – THE UNSUNG HERO  saw a rock steady second week (78 crore) and has thus netted 194 crore (to be validated) in two weeks from India and is on way to a blockbuster status. In fact, even during it's third weekend, TANHAJI is turning to be more than a handful for the two new releases of this week!

Concluding with  Deepika Padukone’s CHHAPAAK, post a fair (28.50 crore) opening week, the film crashed but added another 5.50 crore, thus netting 34 crore (to be validated) in two weeks from India and will end up as an average fare, after accounting for the non-theatrical rights.