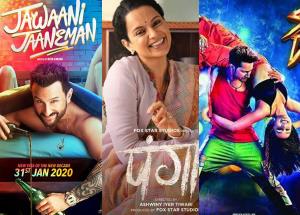 The major release of the week, Saif Ali Khan’s JAWAANI JAANEMAN, which was expected to be a sort of a comeback for Saif (more so due to his sterling negative act in the blockbuster TANHAJI), failed to keep up to the expectations. The opening day saw a 10 percent start with a small pick up during the latter shows, resulting in a 3 crore plus opening day.

Having said that, with Saif in his ‘comfort zone’, back in (mature)  Casanova image and favourable reviews, the film is expected to see a decent weekend haul,  despite limited screening.

The other release,  Himesh Reshammiya’s HAPPY HARDY AND HEER saw a so-so start.

Meanwhile, last Friday’s dance extravaganza, Remo Fernandez directed Varun-Shraddha starrer, STREET DANCER 3D, could not quite build on a 40 crore weekend as it ended the opening week netting 54-55 crore. And just as we had said in our regular box-office report, the film has to show strong legs during the coming week(s) to be declared a success.

The other release of the same week as STREET DANCER 3D,  Ashwini Ayer Tiwari directed Kangana Ranaut starrer, PANGA, could not accrue the benefits of good reviews, netting 16-17 crore during the opening week and has failed commercially.

Concluding with Ajay-Saif’s TANHAJI – THE UNSUNG HERO, the film continued its strong run even during its third week with another 39-40 crore haul,  thus netting 232 crore (to be validated) in three weeks from India and is a blockbuster. The film is also doing very well during the fourth weekend.