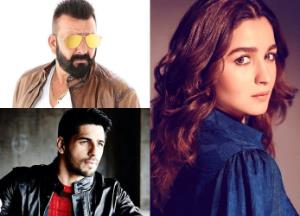 Several top actors including Sanjay Dutt, Alia Bhatt and Sidharth Malhotra were scheduled to shoot in Kashmir for upcoming projects over the next few months, but the repeal of Article 370 has put Bollywood's plans to shoot in Kashmir on hold for now.

On Monday morning, Home Minister Amit Shah announced in Rajya Sabha that the government has decided to revoke Article 370 of the Constitution which grants special status to Jammu and Kashmir. The government also announced its decision to split the region into that two Union territories — Jammu and Kashmir, which will have a legislature, and Ladakh, which will be without a legislature.

The abrogation of the Article has had a ripple effect on the shooting schedules.

Sidharth was supposed to shoot for Captain Vikram Batra's biopic "Shershaah" in the Valley. Directed by Vishnu Varadhan from a story written by Sandeep Srivastava, the movie is backed by Karan Johar's Dharma Productions.

According to a source close to the actor, the shooting schedule has been pushed, with no new date given yet.

"Sadak 2" makers had plans to shoot an important segment of the film with Sanjay, Alia and Makarand Deshpande, who essays role of a godman in the movie.

The film marks the return of Mahesh Bhatt as director, and the filmmaker had planned to shoot sequences pertaining to the protagonists reaching the godman's ashram. The shooting is on hold for now.

IANS messaged Mahesh and Makarand for an update. The query wasn't answered till the time of going to press.

Without revealing the names, line producer Md. Abdullah of Hami Asto Productions, who arranges shoots in the Jammu and Kashmir regions, said that two to three Bollywood films and one big Telugu movie were slated to arrive over the next few months for shooting.

"There were some big projects in line — two to three Bollywood films and one Telugu movie. Now, we can't say if that will happen because of the disturbed environment. Maybe they will push the schedule or maybe they will go to a different location," Abdullah told IANS.

"We just wrapped up shoot of the Telugu film 'Venky Mama', which stars Venkatesh. They shot in Pahalgam and Sonmarg. The month-long shot was wrapped up in June. One big Bollywood film was supposed to start shooting in August-end. They all are stuck now," added Abdullah, who is worried about what the future holds for local line producers like him.

"Yeh achanak se hua (this happened all of a sudden). Now, it has been done. Inshallah, things will get settled soon. If that doesn't happen, it will be a big problem for us because this is our 'rozi-roti' (bread and butter)," added the line producer, who has worked on John Abraham's "Romeo Akbar Walter", Abhishek Bachchan's "Manmarziyaan" and Arjun Rampal's "Final Call" in the past.

The production houses might have to bear additional expenses owing to the shuffle of the schedule, although the amounts will probably not be exorbitant.

"There is some unrest and confusion going on in Jammu and Kashmir. The government has taken measures. So, all the planned shoots in the region will be delayed for a while. It will not have much negative impact in terms of cost escalation, because productions of these films were yet to start," film and trade expert Girish Johar told IANS.

"Cost would have been a problem had they started shooting in Kashmir, and were forced to come back. Now, there will be a nominal increase in the cost," Johar added.

The love affair between Bollywood and Kashmir is long-standing. From Sharmila Tagore to Alia Bhatt, and from late Shammi Kapoor to Salman Khan, Indian actors down the generations have starred in blockbusters that saw filmmakers capture the beauty of the region in their films.

Twitter
Flip
Koo
Previous article
Sonu Nigam back with a new song “Kahan Kho Gaye Wo Yaar”
Next article
Sulbha is a calm and composed actor: Sudhir Pandey
This May Also Interest You
Technology