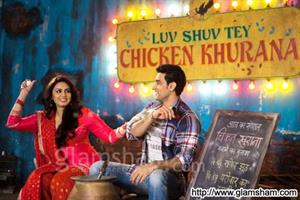 UTV released the first song of their much awaited film LUV SHUV TEY CHICKEN KHURANA (LSTCK) across web. The song 'Kikli Kalerdi' is set against a backdrop of family get together which captures the spirit of a typical Punjabi style joint family dinner with some music and of course Chicken! The song is being released in 2 versions – Hindi and Punjabi, which is a first for any Hindi movie having two versions of the same song simultaneously hitting the market.

Amit Trivedi, one of the most talented names in the music industry today has not only composed the song but has also sung it and Honey Singh the acclaimed singer-cum-rapper contributed to the song with his unique rapping skills.

Amit Trivedi is extremely excited about this song, 'The heart of LSTCK lies in Punjab and we wanted to capture the spirit of Punjab in the entire album. It was very interesting to work on 'Kikli Kalerdi' as it celebrates the energy and life of Punjab with Kikli being one of the popular folk dances there. Also for the very first time we have composed a song in 2languages simultaneously which is the first for any movie and was an interesting challenge for me as a composer.'